The “On The Road” blog series began with season 2007-2008, and were originally intended to be a record of games that the “Beardy Man” and the “Daft Lad Next Door” went to.  Turned out to be a bit more than that though, as I tried to make the blog an interesting, good read.

The trouble with that was that I’d had no journalistic training, and apart from a couple of years writing short  YEFL reviews for the Football Post along with dabbling at programme production and match reports for Eastwood Town, I  was a novice at the blogging lark!

2009-2010 – the Mansfield Town season ticket blog… the no camera in Field Mill rule spoiled this for us. Non-league football gone crackers!  Watch any Premier League / La Liga game and you will see hundreds if not thousands of spectators with cameras.

2010-2011 – our most complete and busy season – mainly dedicated to raising funds for APTCOO. We reached a grand total of £850 with the help of our generous friends.

2011-2012 – this was a difficult season for both of us. I had a few serious health problems, and Kev had a lot of family commitments, so we didn’t get to as many games as we would have hoped to.  Still managed over 100 games though, and saw shedloads of goal.  No season statistics, but who cares anyway???

The main downside to the season just gone was that we only managed to visit two new grounds – Awsworth Villa and Southwell City.  We aim to address that in 2012-2013 by being a bit more selective and roaming a bit further from home. Still Notts/Leics/Derbys, but there are plenty of venues we haven’t visited in the three counties.

The season 2011-2012 began for us on July 2nd 2011 at the pre-season Teversal tournament. After 20 friendlies, our league campaign began with the NCELP game between Arnold Town and Long Eaton United on August 6th.  The final game was on 26th May 2012 at Southwell City  - a  heck of a long season!!

My memory isn’t what it used to be, so can’t do an end of season awards thingy, but me and Kev both agree on the best goal of the season –WAYNE COOKE take a bow.   His solo effort against South Normanton on January 28th 2012 was something special. Cooke collected the ball on halfway, turned his marker, ran at goal and skipped through the Athletic defence before rolling home. 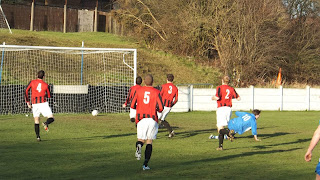 We also agreed on the best player we’ve seen this season – had to be a Heanor player really as we spent a lot of time last season watching the Lions. NICO DEGIROLOMO only joined the club pre-season, but fitted straight into the back line and grabbed a few vital goals as well as the Lions finished top of the EMCL.

Enjoyed watching ex-NSL teams Basford United and Clifton FC in the CML South Division.  Basford chalked up a league and floodlit cup double, while Clifton finished a creditable fourth in the league, but also made the finals of both the CML Cup final and the Notts F.A. Senior Cup final.  The All Whites lost both theses games, but were not disgraced in either.

“On The Road”season 2012-2013 is already up and running, but will it be used?  Who knows?  I lost the will to carry on towards the end of last season – as it became less of a hobby, more a drudge – done because I felt it had to be done, not because I wanted to do it!

What a glorious day, and what a fantastic setting!!  The War Memorial Recreation Ground at Southwell has two football pitches, a tennis club, bowls and a kids playground.  This game was played on the top pitch  - the bottom pitch has been re-seeded.  Last time we went to Southwell the top pitch was a bit of a bog,  but for a public park pitch at the end of a very long season, the surface was in really good condition. 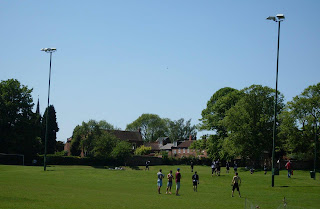 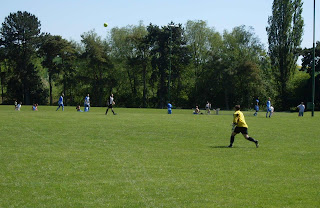 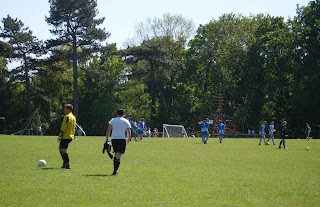 Was in the company of Maurice MacFarland for this match, along with his serial hopper friends. Kev's new fencing is coming along nicely, but it's ongoing construction kept him away from this game.

A few familiar names and faces were on show for the visitors, Messrs. Westcarr, Walters and Garmston all in the Basford starting eleven.

No match report, but I can list the goal times and the shirt numbers of the scorers : no-one could seriously expect me to get a team sheet, surely!!!!

Timeline :
18 minutes -- Basford's number 9 fires home from 12 yards. 0-1
22 minutes -- time out for drinks called by Referee Mr. Prost ( in a friendly, this would be acceptable, but in a bona fide league match?) ....
26 minutes -- Southwell's no. 10 was allowed time at the far post to pick his spot, firing across the Basford keeper into the back of the net. 1-1
27 minutes -- Darren Garmston found space in the box and rolled home. 1-2
37 minutes -- Carl Westcarr fired across the keeper from an acute angle. 1-3
38 minutes -- Cashell Walters curls the ball past the home keeper after great work down the right by their no. 7 and Westcarr.  1-4
H-T 1-4

No admission or programme.  Public park so a few watching - but head count? No chance!

Wednesday 23rd May 2012 -- Notts F.A. Saturday Minor Cup Final
﻿
I thought I'd be on my own for this game as Kev was busy, but after swapping texts with Rob"the66pow" Waite, the blogmeister managed to drag himself away from a potential evening of domestic bliss to join me at Eagle Valley. 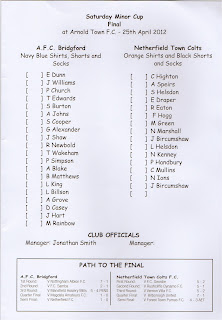 Also had Robin Bourne, Mick Kilbee and Malcolm Fox  from the Notts F.A. to keep me company , so  overall a very enjoyable evening spent with very pleasant people.

Bridgford hit the post early doors, but Netherfield looked the most likely to score, and they duly obliged when FELIX HOGG was played in one-on-one with Eddie Dunn, the no.6 calmly chipped over the AFC keeper.

Robin Bourne was kind enough to let us have a look at the team sheets, which were duly photographed - Rob provided the half time coffee.... 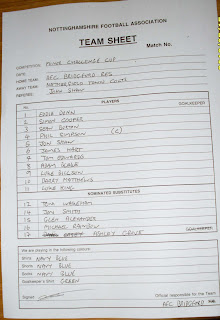 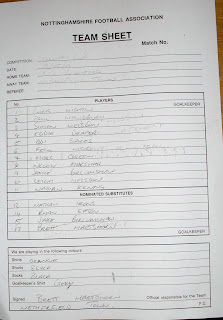 I had just mention to Robin that after an hour 2-0 was good enough for me, when LUKE KING looped a header over Colts keeper Chris Highton, to bring the spectre of extra-time into our minds.  The AFC players had enough chances to have wrapped up the tie, but resolute defending and some abject attempts at goal let them down big time. 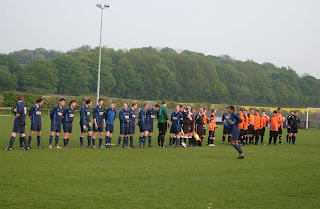 As it transpired, as a Bridgford attack broke down in the 82nd minute, the ball was cleared to halfway where NATHAN IONS was on hand to collect.  The sub raced at goal and used his upper body strength to fend of a defender before firing past Dunn. Extra-time spectre laid to rest.  F-T 1-3

As we get towards the end of another season of non-league footie, these games are the ones that you might not bother about,  but this was an end of season treat, with the Dunkirk fifth goal something special.

Kev was out and about for this game, and we arrived at the ground just as the teams were entering the pitch. We were slightly surprised that Referee Robin Bourne had no Assistants.  Club linesmen are the norm at this level, but with only one game tonight, you'd have thought a couple of young lino's could have been utilised. Ok, I know expenses have to be paid, but there had to be a few local young 'uns available.

From a free kick in the third minute, JORDAN ALLS volleyed home from the corner of the 6 yard area to give the home team the lead. Half an hour later, RYAN EJEZIE was picked out in the box by Alls, and the no. 6's controlled volley flew past the Clippo keeper.

On 44, the visitors halved the deficit when their no. 10 hammered the ball into the roof of the Dunkirk net. H-T 2-1

With 10 minutes of the second half played, EJEZIE netted again for Dunkirk, the young midfielder showing great composure in front of goal before slotting home.

A trip in the box on 70 was waved on by Mr. Bourne as Dunkirk had the advantage - but within one second it was clear that there was no advantage accrued, and the penalty was duly given. This caused the defenders to complain vociferously, but the decision seemed fair enough to us. LEE DAY stepped up and beat the keeper from the spot.

Then in injury time, WILL COUTTS gave us one of the goals of the season, waltzing his way through the entire Clipstone back line before rounding the keeper and rolling the ball into the net. Think John Barnes v Brazil - yep ... it was that good.....well - almost!!!  F-T 5-1


Went to this game not really knowing what to expect. End of season games that meant nothing for either team, don't usually produce exciting, flowing football - and it has to be said, this was no exception!

With Kev busy again, I thought I'd be on my own at Green Lane, but I met up with former Kirkby Town Chairman Andy Cruddace and Fred KirkbyTown inside the ground, and spent the first half in their company. For the second half, my time was split between Eastwood Town boss John Ramshaw and Clifton defender Mike Banister's dad, Dave. 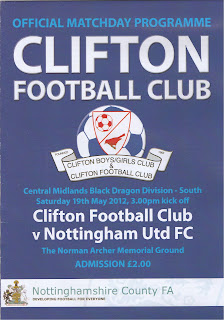 This should, on paper at least, have been a home banker, but United knocked seven past Newark last time out so the home team could take nothing for granted. 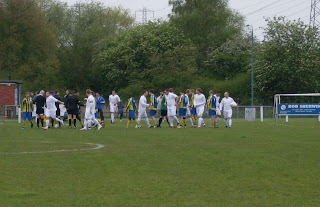 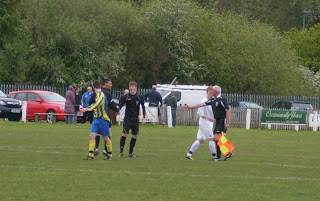 ANDY RICHARDS grabbed 6 against Newark, and it was the no. 10 who opened the scoring with just 12 minutes of this game played - a speculative 30 yarder that the Clifton keeper appeared to misjudge, allowing the ball to creep just inside the post.

Micky Evans fired just wide for the home team a minute after, but it was his strike partner ALEX HAUGHTON who brought the All Whites level on 18, firing home from 8 yards after he was picked out by Ben Richardson.

United took just seconds to re-take the lead. An air kick by a home defender allowed the ball to travel across goal to RICHARDS, and the big man made no mistake from 6 yards.  Clifton were by far the better team in the first half, and were deservedly back on terms on 43, although it was a neat, headed own goal from Evans' cross by United's no. 6 that levelled the scores.  ﻿
The home team almost went ahead with their next attack, but the ball was cleared off the line. Was it in? The officials said no.
Halfway through the second period, CHRISTOPHE PINARD stabbed in from close range to give the travellers the lead for the third time in the game.  Clifton's task became more difficult after 75 minutes, when Vaughan Harvey was dismissed by Referee Gareth Davis after the centre-half made a rash challenge,  knowing he had already been booked in the first half.


When an attack broke down with one minute to play, the ball was fired up the pitch and when the ball was crossed, no-one picked up RICHARDS inside the area and the striker completed his personal triple. F-T 2-4

On The Road previous seasons